As a producer for NPR's Culture Desk and Morning Edition, Naina is responsible for cutting audio, mixing stories, and sound-designing/scoring pieces (when necessary) on daily deadlines, in a fast-changing news environment. Below are the various radio stories Naina has produced, including film reviews, sound-rich features, and news stories. 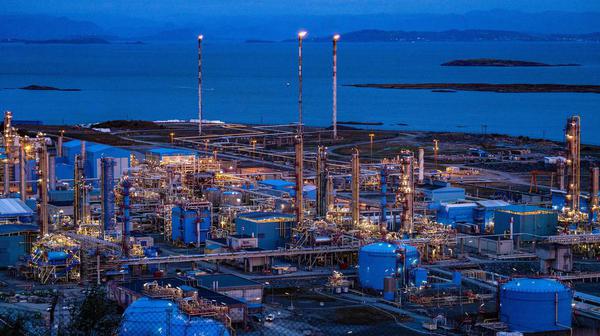 The Nord Stream leaks are a wake-up call for countries with vulnerable pipelines A week after several suspicious ruptures were discovered along the undersea Nord Stream pipeline, gas has reportedly stopped leaking but the questions keep flowing. Namely: What — and who — caused the damage? And how can countries try to prevent similar incidents going forward? Scientists say the two leaks were likely caused by powerful underwater explosions, based on seismic data from Sweden and Denmark. And Euro 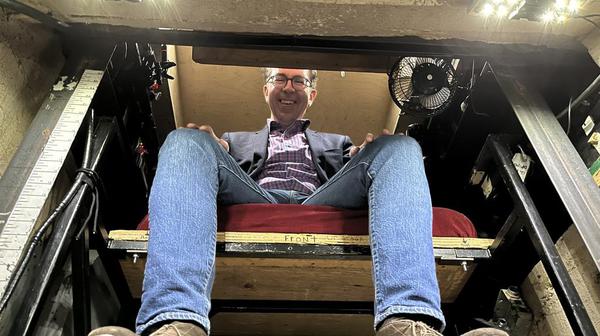 The hidden world of an opera prompter

The hidden world of an opera prompter To reach the prompter's box at the home of the San Francisco Opera, Matthew Piatt heads under the stage and walks down a long, narrow passageway. Then he shimmies up a metal ladder. "I always have to be careful not to rip my pants," Piatt says, as he hoists himself into a seat and pushes a button to propel himself upward several feet, using a hydraulic lift. From this vantage point, Piatt can view the entire stage through an opening that's about the size 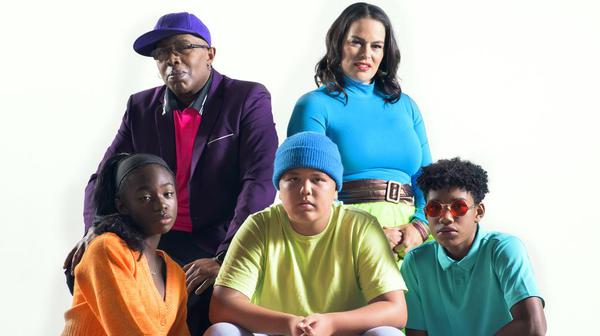 It's kids who are the stars of the Grammy-nominated Alphabet Rockers When Kaitlin McGaw and Tommy Soulati Shepherd founded the performance collective Alphabet Rockers, the longtime friends wanted to inspire children to make social change. Hip hop seemed the perfect medium. "When you look at hip hop, it's an invitation to be exactly who you are," said McGaw. "There's also a lot of wordplay, so it's absolutely a root of fun conversation, expression, bravado, listening, all these things that teac 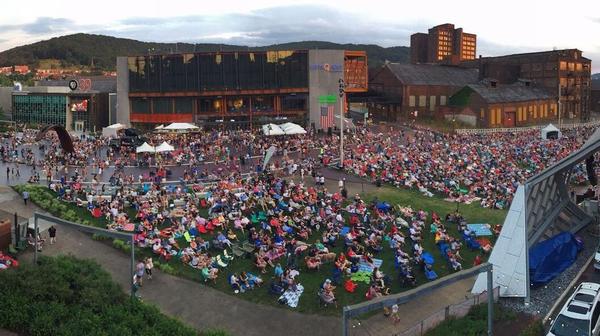 Community bands are back after being battered by the pandemic

Community bands are back after being battered by the pandemic Community bands date back to the American Revolution. The Association of Concert Bands estimates that there are more than 1,000 of them around the country. Several have been playing since the 19th Century, including The Allentown Band in Pennsylvania, which began in 1828. The pandemic has battered these amateur bands but they're getting back to performing, especially after Labor Day. The Metropolitan Atlanta Community Band, a predom 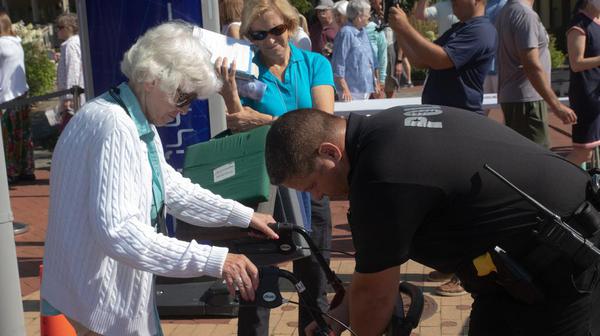 Visiting the storied Chautauqua Institution in western New York, with its narrow streets winding past gingerbread-trimmed Victorian houses, can sometimes feel like taking a journey into a quieter, gentler past. It's a friendly, earnest place for serious conversation and quiet contemplation, where crime is practically non-existent and the realities of the outside world can seem a long way off. But on the morning of Aug. 12, reality came crashing in. Author Salman Rushdie was brutally stabbed i 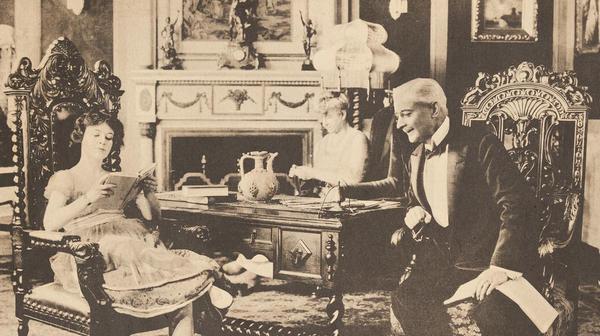 Long before there were movie trailers to help people make their viewing decisions, there were these things called "lobby cards." The hand-drawn images or photographic stills typically included a "title card" showing the name of the film and the key players involved, and then a number of "scene cards" showing key moments from the plot. "Think of it as a static trailer," said Melissa Walker, curator of Experimental Marriage: Women in Early Hollywood, an exhibition of silent era lobby cards curre 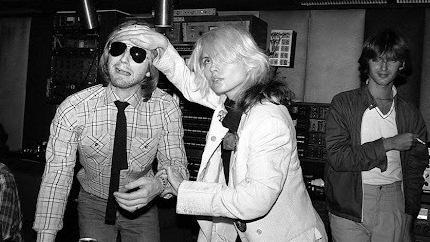 Against the odds: How Blondie shattered the conventions of punk and pop

Against the odds: How Blondie shattered the conventions of punk and pop By the early 1970s, the Greenwich Village folk scene had faded, and a new sound was wafting up from the street. New York Dolls frontman David Johansen says it found a home just north of Bleecker Street and east of Washington Square. "I was friends with Eric Emerson, who had a band called Magic Tramps, and he said that he was going to do a gig at this new place, Mercer Arts Center, and would my band want to come and open for 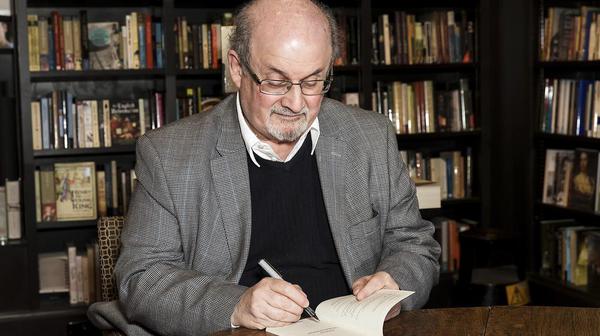 Exiled writers reflect on freedom of speech in America in light of Rushdie attack For dissident writers fleeing persecution overseas, the United States has long been a safe haven, a place where freedom of expression is tolerated and, even, valued. That suddenly changed earlier this month, with the brutal attack on author Salman Rushdie at a speaking event in western New York. "Oh my God! When I heard that, I was screaming," said Masih Alinejad, a writer and activist who has criticized the Ira 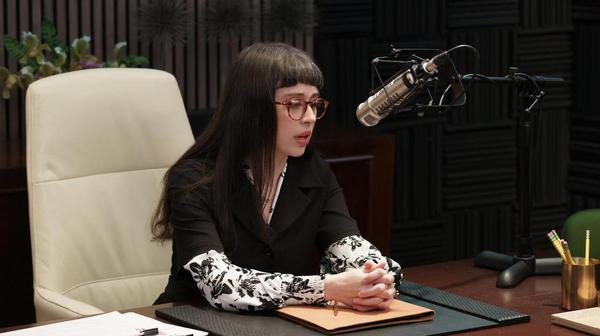 The rise of the 'Morally Dubious Podcaster' in pop culture

The rise of the 'Morally Dubious Podcaster' in pop culture One of this summer's most popular shows centers on a slimy true crime podcaster. Only Murders In the Building, on Hulu, follows three fans of a Serial-like show called All Is Not OK in Oklahoma. By the end of season two, it becomes clear the show's host, played by Tina Fey, may be a cold-blooded murderer herself. "I need something with famous people, and blood!" she wails to an assistant. "God, I need a murder. A good one!" Fey's char 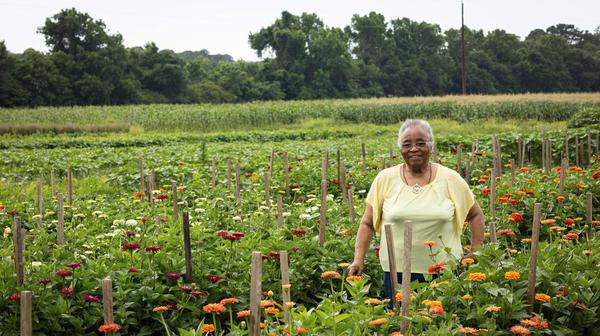 For this 89-year-old Gullah Geechee chef, cooking is about heart

For this 89-year-old Gullah Geechee chef, cooking is about heart Lots of home cooks would be excited to get a book deal. In the case of one home chef, she got that opportunity at the age of 89 years old. Emily Meggett is from the low country of South Carolina, and NPR traveled to her home on Edisto Island to appreciate some of her cooking. Edisto Island is a beautiful, quiet community of about 2,000 people, nearly an hour's drive south of Charleston. The roads are framed by massive oak trees d 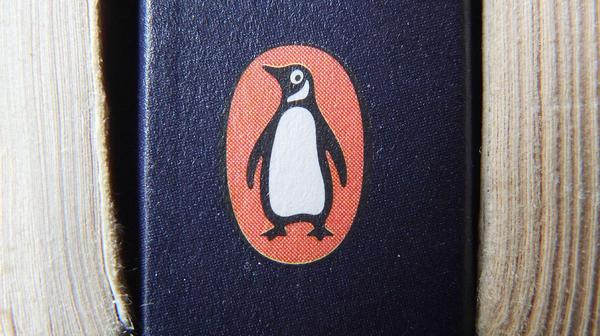 One of the largest antitrust trials ever to hit the publishing industry is unfolding in a federal courthouse in Washington. The Department of Justice says that the proposed merger announced in 2020 between Penguin Random House and Simon & Schuster would stifle competition. But what would a successful merger mean on a practical level for booksellers, authors and others in the industry? Saira Rao, an author in Richmond, Va., has been watching the case closely. Even though Penguin Random House is 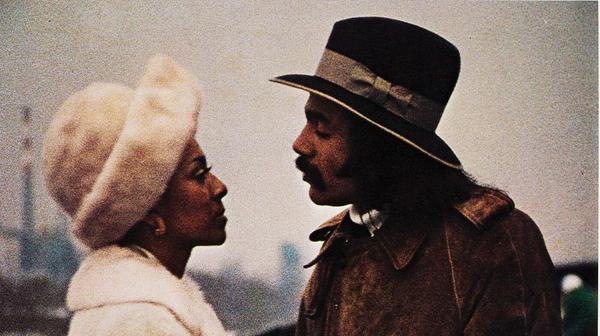 Super Fly at 50: A blaxploitation classic that remains a powerful pop culture force

It has been 50 years since Sheila Frazier made her big-screen debut as Georgia, girlfriend to wily drug dealer Youngblood Priest, in the blaxploitation film classic Super Fly. And Frazier estimates there hasn't been a week in her life that has passed since the premiere without someone mentioning the movie. "It does surprise me that it's been 50 years and people are still talking about it," says Frazier, who initially took the job thinking it would be great to act in a movie with Ron O'Neal, wh 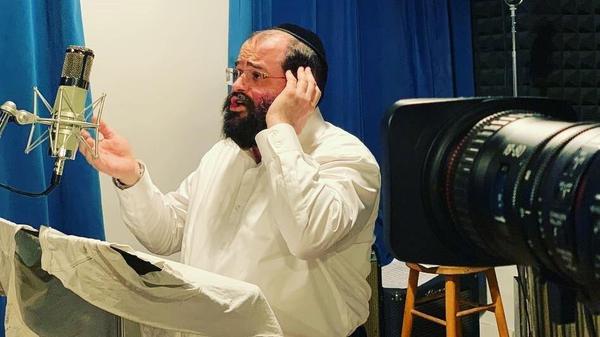 A group of Orthodox Jews in Brooklyn is reviving the golden age of cantorial music Jeremiah Lockwood comes from a family of cantors, the spiritual leaders that guide Jewish congregations in prayer and song. His grandfather, the late Jacob Konigsberg, served as a cantor in several cities and performed in concerts outside of religious services, always hoping to inspire people with liturgical music. It's no surprise that Lockwood would incorporate cantorial music in his own band, The Sway Machine 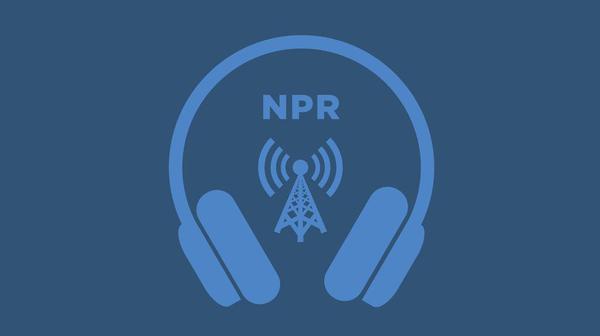 Jordan Peele's latest thriller, Nope, has been shrouded in secrecy, but the shroud comes off this weekend. Filmmaker Jordan Peele has an enviable record as a writer-director. Both of his first two films - the mystery thriller "Get Out" and the horror thriller "Us" - earned rave reviews, and he chalked up more than a quarter of a billion dollars in ticket sales. His latest thriller, "Nope," mixes science fiction with the thrills in ways that critic Bob Mondello promises us he will be very carefu 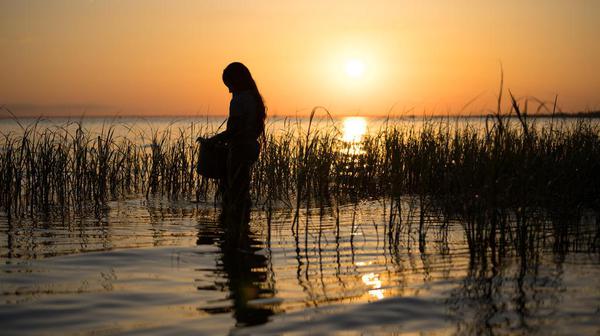 Questions linger over 'Where the Crawdads Sing' author as film adaptation is released Where the Crawdads Sing tells the fictional story of Kya, a girl left to raise herself along a North Carolina bayou in the 1950s and 60s. "The marsh girl," as she's known, is reviled and shunned by those in the nearby town. In time, Kya is put on trial for murder. Now, there's a film adapted from the novel by an author with a mysterious past. It took wildlife scientist Delia Owens a decade to write Where the 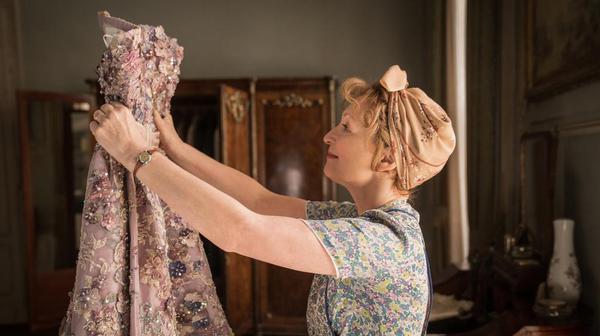 Dreaming of Dior, a charwoman follows her bliss in 'Mrs. Harris Goes to Paris'

Dreaming of Dior, a charwoman follows her bliss in 'Mrs. Harris Goes to Paris' Last week, while Chris Hemsworth's Thor was smashing up eternity, I retreated to a quieter cineplex auditorium to soak up the period pleasures of Mrs. Harris Goes to Paris. The year is 1957 in a bustling, overcast London, where cleaning lady Ada Harris (Lesley Manville, ever chipper and commonsensical) is all about brightening everyone else's day, even as folks barely notice her. She makes their apartments sparkle,

In 'Thor: Love & Thunder,' the hammer-throwing hero takes on Gorr the God Butcher

In 'Thor: Love & Thunder,' the hammer-throwing hero takes on Gorr the God Butcher Thor becomes the first Marvel superhero to get a four-quel in Thor: Love & Thunder, which finds him battling a villain called Gorr The God Butcher. The movie "Thor: Love And Thunder" opens in thousands of theaters this weekend. It is the latest adventure of Marvel's hammer-throwing, axe-wielding superhero, and the movie is expected to bring millions of patrons to cinemas that have been bustling in an almost pre-p 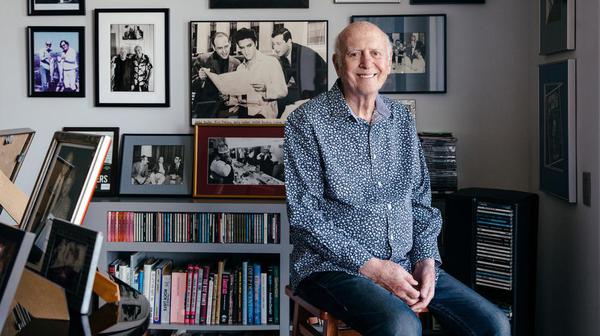 Elvis songwriter Mike Stoller looks back on his hits

Elvis songwriter Mike Stoller looks back on his hits Mike Stoller was 17 when he wrote his first song. He hadn't been interested in songwriting before that, but he was playing piano around L.A. when a total stranger — Jerry Leiber, also 17 — called him out of the blue. "We had this funny conversation on the phone where he asked me if I would like to write songs with him, and I said no," Stoller laughs. He told Leiber that he didn't like songs he heard on the radio; he liked Bartok, Stravinsky, 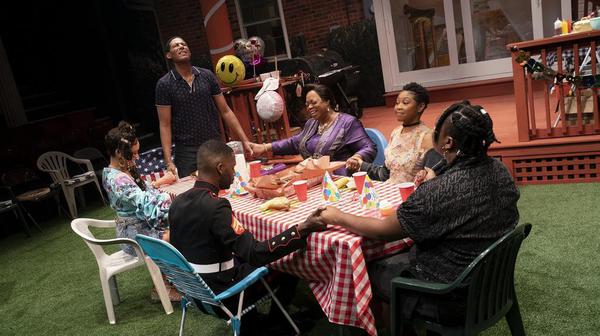 The character of Juicy is described in the new play Fat Ham as "a kind of Hamlet" - his father is dead and a ghost, his uncle has killed him, and that uncle is now married to his mother. This ghost-father, though, struts onstage in a sparkly white suit, smoke wafting from his shoulders. The uncle, played by the same actor, Billy Eugene Jones, is a pig farmer and barbecue pit master, casually cruel. And Juicy, though lonely and sad and smart like Hamlet, is also sensitive and (mostly) kind. And 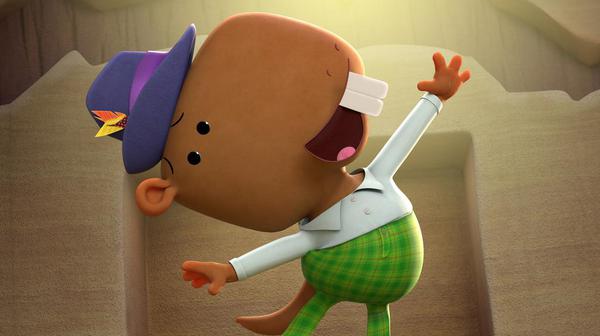 Mo Willems' naked mole rats owe their rock 'n' roll sound to this composer Composer Deborah Wicks La Puma has written music for a pigeon, an elephant and a pig...and now, a colony of naked mole rats. That's what you do when you work with Mo Willems, the author and illustrator of Don't Let The Pigeon Drive the Bus and other children's books. Their latest collaboration is the new, animated version of Willems' Naked Mole Rat Gets Dressed: The Underground Rock Experience, now airing on HBO Max. "
Load More Articles
Close ✕